Over the last year, outdoor living spaces have become one of the most popular and sought-after ideas for homeowners. This has led to an explosion of patios, decks and coverings such as pergolas. More homeowners are focusing on their outdoor living spaces than ever before, and these areas are getting a focus and attention that hasn't been previously seen.

Shade coverings like pergolas can go a long way toward making decks and other structures even more functional and enjoyable. Whether it's a raised deck or a platform deck, adding a pergola can enhance the structure in several ways.

If you're looking for inspiration or ideas to help you find the right pergola and deck combination, check out these five designs.

1. Modern Pergola On an Open Deck 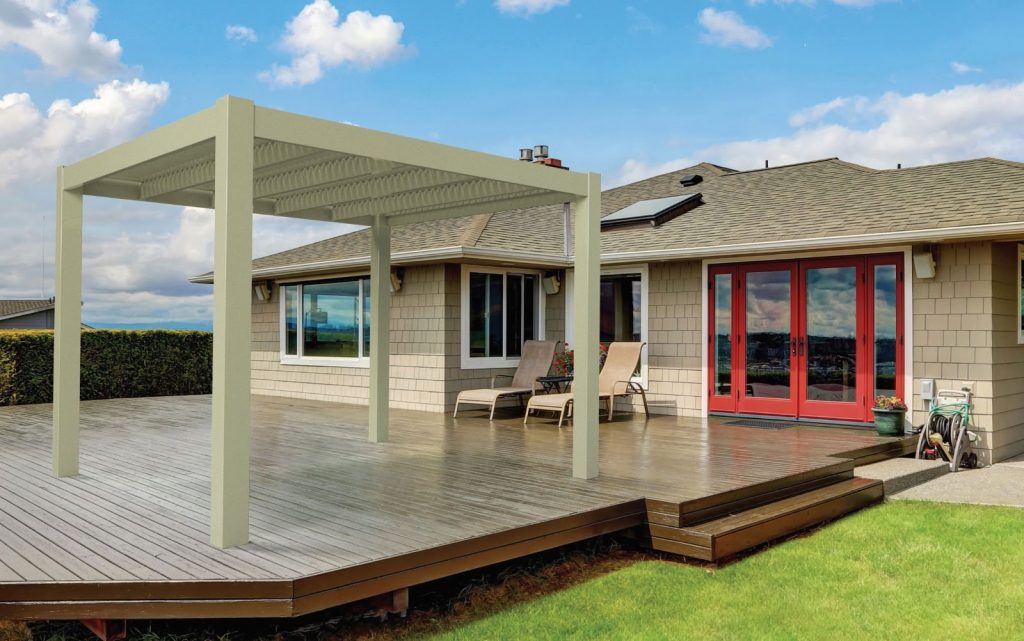 For single-story homes, a platform deck makes a nice alternative to a patio. It's elevated just enough for definition but doesn't require the same kinds of railings that taller decks do. That's what makes this modern freestanding pergola such a good match. It's completely open on all four sides, and the color of the deck picks up the color of the siding on the home, helping to tie the two structures together visually.

In addition, the clean lines of the pergola also match the lines on the deck. The entire space is open, airy and cohesive in design. By using a free-standing pergola, rather than attaching it to the home, it also gives some areas for sunlight, as well as some areas for shade. This makes the deck more usable no matter the time of day or season.

2. Attached Pergola Tied Into the Railing 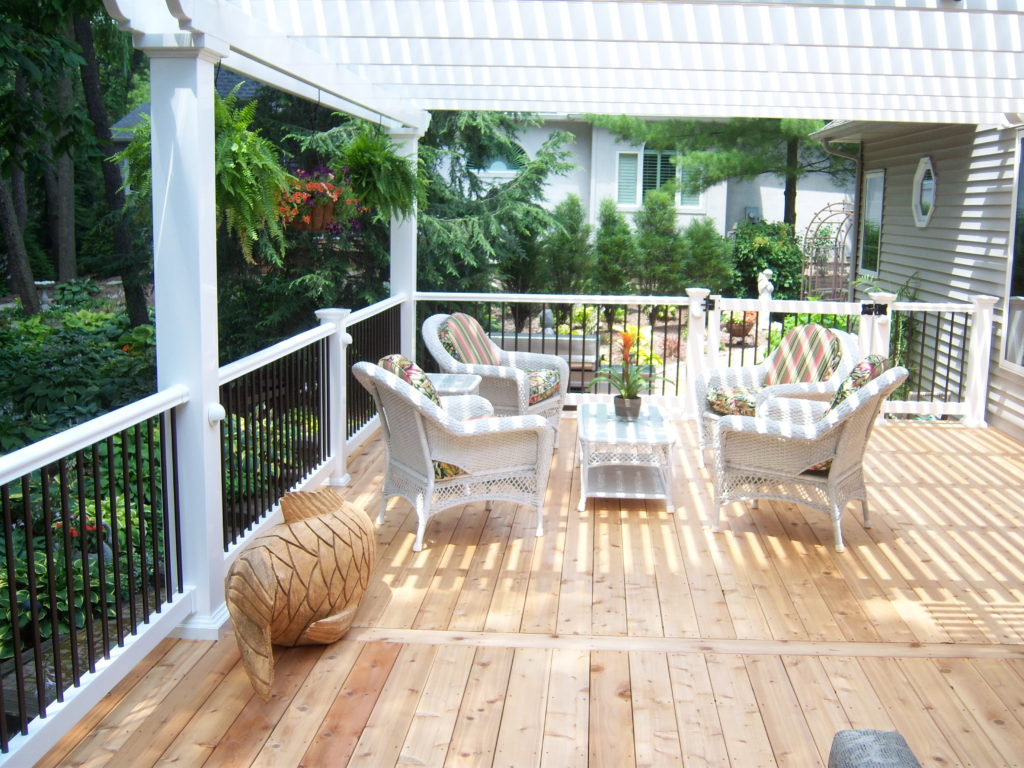 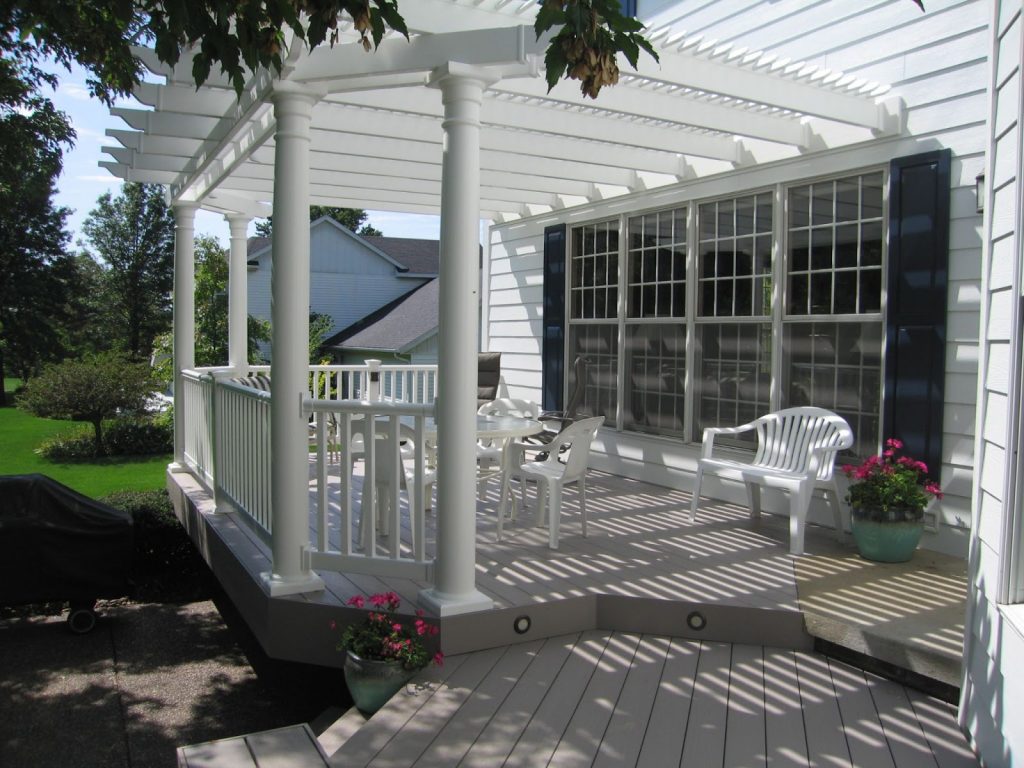 Decks aren't always perfectly square and straight. Sometimes they come in other configurations, such as this deck, with cut corners. The attached pergola is able to match the same shape as the overall deck. It's also blended into the railing, so it's a part of the deck, rather than an addition to it.

This creates a cohesive appearance with the feeling of a cozy enclosure. The entire deck is covered by the pergola, so it gets an even amount of shade throughout. 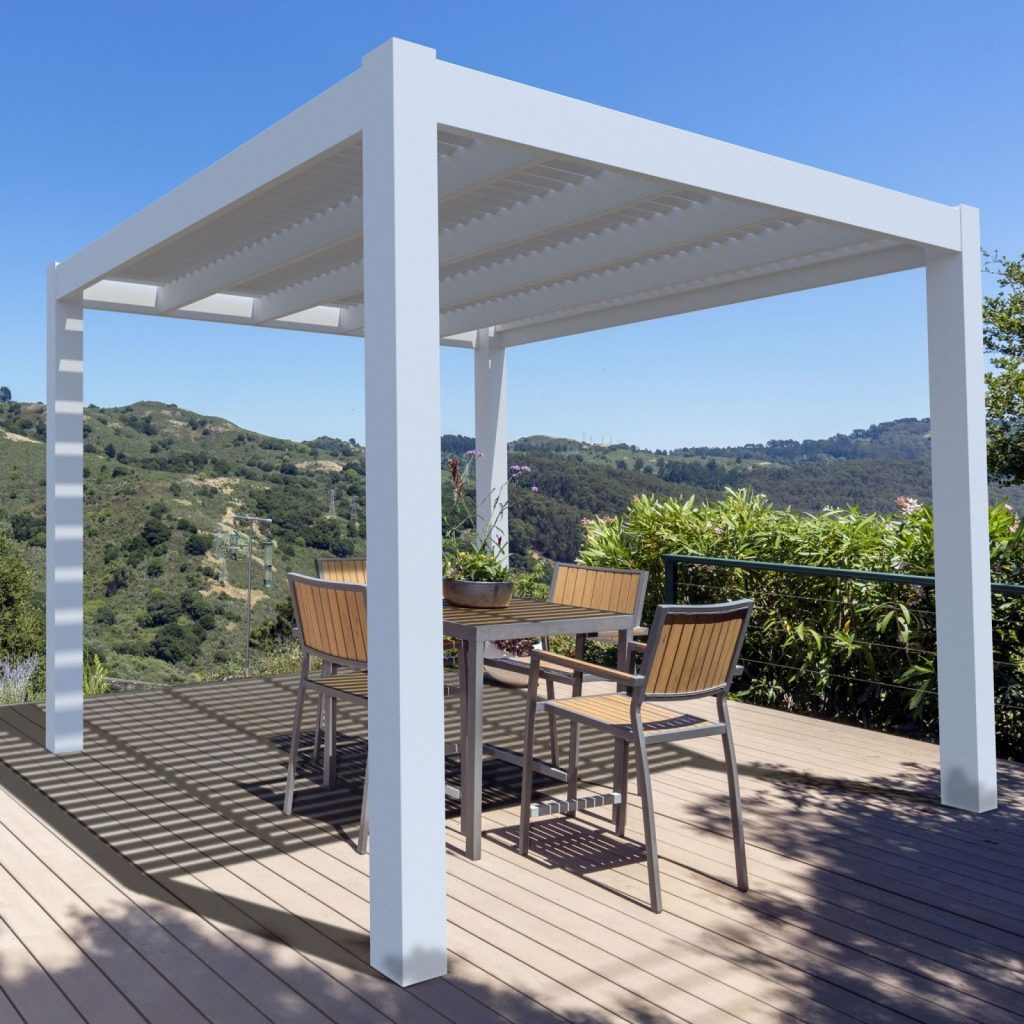 This platform deck is situated to allow for the best possible views. The lack of railing on one side helps ensure that the view is unimpeded, and the pergola helps complete the space, by defining it and providing shade. By using a freestanding design with a modern style, it helps add shade without any obstruction of the view.

The clean lines of the pergola also help complement the overall style of the platform deck. This pergola doesn't compete with the deck or the view but helps to complete the style while adding much-needed shade.

This home has a unique deck and yard space. The deck itself is on an upper story, but there's also some space down below for added use. Two attached pergolas, one on the deck and one on the ground level, help add a lot more shade and definition to the spaces.

These pergolas help make the two spaces feel both larger and more enclosed. It gives them the feeling of an indoor/outdoor living space, rather than a simple deck and yard. This helps improve the style of the whole yard. Users can sit on the deck or organize a lawn game below either pergola, with the two together giving a very finished and unified look to the home.

Complete Every Deck With a Pergola

This coming summer looks to be just as popular for outdoor home improvements as the last year was, and with the tremendous increase in lumber prices, many people may be looking for an alternative to traditional pressure-treated wood.

Using a vinyl pergola kit can help enhance an existing deck or can make a great addition to a new one. In either case, these attractive and low-maintenance pergolas can help enhance both the function and the style of any deck.

Consider adding a vinyl pergola to your next deck project to capture one of these styles yourself. Contact the pergola experts and Heartland Pergolas today to get more information on pricing.

The Top 10 Benefits of Installing a Pergola

The Perfect Accent Over Garages and Windows

How To Install a Pergola on the Front of a House